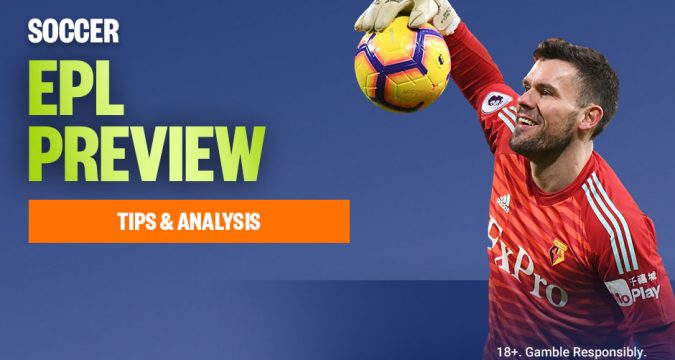 Find the back of the net with tips for all 10 matches of Week 32 of the EPL season headlined by a potential title-deciding blockbuster between Manchester City and Liverpool.

Final Thoughts: Newcastle are aiming to keep the relegation battlers at arm’s length, while Wolverhampton are striving to stay in the top-four mix.

The 15th-placed Magpies turned their season around with a nine-match post-Xmas winning streak, but they have lost their last three and were pounded 5-1 by Spurs last weekend in their worst defensive effort of the campaign.

Eighth-placed Wolves are five points off the top-four pace and have won three of their last four, bouncing back from a disappointing home loss to lowly Leeds with a 2-1 victory over Villa.

Wolves are unbeaten in their last eight matches against Newcastle. After a run of four consecutive 1-all draws, Wanderers snared a 2-1 home win earlier this season.

This is Newcastle’s first home game in more than a month and they have won their last three (and lost just one of their last nine) at St James Park. But Wolverhampton have won five of their last seven on the road are look strong value as the underdog here.

Final Thoughts: High stakes for both clubs with patchy Manchester United three points off the top four in seventh and Everton dangling just one point above the relegation zone.

United have won just one of their last four league games, held to a 1-all draw by Leicester City at home last weekend. They were also dumped out of the Champions League by Atletico Madrid in mid-March.

Everton have lost 10 of their last 12, following up their 2-1 Week 31 defeat at West Ham with a shattering 3-2 catch-up loss to 18th-placed Burnley. The Toffees led at halftime after a pair of Richarlison penalties but were overwhelmed in the second half.

Everton have won just one of their last 15 against United, but they managed draws at Old Trafford in the second half of last season and in Week 7 this season.

Man United have struggled to put away some ordinary teams over the past couple of months, but they should have enough attacking weaponry to overwhelm an Everton side on a short turnaround that conceded three goals to Burnley.

Final Thoughts: Watford will view this home clash as vital to their tenuous hopes of avoiding the drop. Likewise, Leeds are eyeing off an opportunity to move away from the relegation picture.

Second-last Watford are three points from safety. After managed two wins and a draw at Old Trafford in their previous six games, the Hornets went down 2-0 at Liverpool last weekend.

Leeds are 16th and only six points clear of danger but are on something of an upswing. Following a six-match losing streak that saw them leak 21 points, they have recorded wins over Norwich and Wolves, and a Week 31 draw with Southampton.

The market is finding it hard to split these desperados and a tense draw would not surprise with every point valuable at this stage. Watford average less than a goal per game but Leeds have not kept a clean sheet since November.

Final Thoughts: Chelsea have a handy buffer in third place but will be hell-bent to bounce back from a shock, streak-ending beatdown last weekend. The Blues, who had conceded just one goal in winning their previous five games, were thrashed 4-1 after scoring first in the 48th minute.

Southampton have slid to 12th courtesy of a four-match winless streak, following up three straight losses (after losing only two of their previous 13) with a 1-all draw at Leeds in Week 31.

Southampton have won just one of their last 14 against Chelsea, who took out the teams’ Week 7 clash 3-1 and eliminated the Saints from the League Cup on penalties three weeks later.

Final Thoughts: Arsenal are tied with Spurs for fourth and have a game in hand heading into this home clash. But it’s been a disappointing few weeks for the Gunners, bookending a 1-0 win at Villa Park with a 2-0 home loss to Liverpool and a woeful 3-0 defeat at Crystal Palace.

Meanwhile, the wheels have fallen off for one-time European hopefuls Brighton, who are languishing in 13th. The Seagulls halted a six-match losing streak last weekend in the least inspiring way imaginable: a scoreless draw at home to last-placed Norwich.

Brighton have been a bogey side for Arsenal since returning to the Premier League in 2017. The Seagulls have managed three wins and three draws in the clubs’ last eight encounters; they played out a scoreless stalemate at the seaside in Week 7.

Brighton have scored just one goal in their last seven games, so Arsenal should have little trouble keeping a clean sheet (despite last week’s sieve-like effort) and getting the three points.

Final Thoughts: Tottenham Hotspur head to Villa Park chasing a fourth straight win as the top-four battle reaches fever pitch. Spurs are equal-fourth with Arsenal, who have a game in hand. But they’ve got real momentum after wins over Brighton (2-0), West Ham (3-1) and Newcastle (5-1) in the past few weeks. Son Heung-min has scored three goals in Spurs’ past two games.

Eleventh-placed Aston Villa, meanwhile, have lost their last three to West Ham (2-1), Arsenal (1-0) and Wolverhampton (2-1). Their goals against the Irons and Wolves came in the dying minutes.

Spurs have won 13 of their last 15 against Villa, including a 2-1 home result in Week 7. They’ll be confident of a more emphatic win despite being on the road in a straightforward proposition for punters.

Final Thoughts: Ninth spot goes on the line with Crystal Palace and Leicester City currently locked on 37 points. Palace boast the superior for-and-against but Leicester have two games in hand and are finally stringing some performances together.

After winning three of their previous four, Leicester grabbed a point at Old Trafford via a 1-all draw. Kelechi Iheanacho opened the scoring midway through the second half but their lead lasted only three minutes.

Crystal Palace are arguably in more of a purple patch, though, going unbeaten in their last five. After holding Man City to a scoreless draw, they routed Arsenal 3-0 in Week 31. Jean-Phillipe Mateta and Jordan Ayew scored first-half goals before Wilfried Zaha’s penalty – his fourth goal in five games – sealed the deal.

Leicester are unbeaten in their last five matches against Crystal Palace. The teams drew 2-all at Selhurst Park in Week 7 after Palace recovered from a two-goal halftime deficit.

Though it’s one of the least consequential matches of the round, it also shapes as one of the most entertaining with both teams in good touch. The over looks a good play here.

Final Thoughts: It’s a bottom-three battle with Norwich City virtually on their last chance and Burnley aiming to possibly jump into 17th.

Burnley, currently 18th, snapped a four-match losing streak (all to nil) with a 3-2 victory over Everton, overcoming a halftime deficit to pull to within one point of the Toffees on the ladder.

Last-placed Norwich are six points further back. They halted a six-game losing run via a scoreless draw at Brighton.

The cellar dwellers played out a scoreless draw at Burnley in Week 7. A point isn’t much good to Norwich here – they have scored only 18 goals in 30 games but look for them to at least throw some caution to the wind. I’m expecting Burnley to be too good, however, on the back of last week’s buoying performance.

Final Thoughts: West Ham are still right in the top-four mix, but they should be wary of a giant-killing Brentford side that has little to lose.

Brentford are 14th but nine points clear of the bottom-three and have won three of their last four – culminating in a stunning 4-1 blitz of Chelsea at Stamford Bridge last week. Vitaly Janelt scored two of the Bees’ goals as their attack went ballistic during the second half.

Sixth-placed Hammers are three points behind Tottenham and Arsenal. They are chasing consecutive wins for the first time since the first half of January, bouncing back from a 3-1 away loss to Spurs with a 2-1 defeat of struggling Everton on the weekend.

Brentford grabbed a 2-1 away upset over West Ham in Week 7 courtesy of a 90th-minute winner from Yoane Wissa.

West Ham are only narrow favourites on the road, but with so much at stake I’m still leaning their way against an in-form host.

Final Thoughts: The biggest game of the season.

With eight games each left to play, Manchester City holds a slender one point lead over Liverpool at the top of the Premier League ladder.

A few missteps from City over the past couple of months have invited Liverpool right into the championship frame. The defending champs were held to a scoreless draw by Crystal Palace in Week 30, but responded last weekend with a 2-0 win at Burnley as Kevin de Bruyne and Ilkay Gundogan scored in the opening 25 minutes.

The Citizens grabbed a 1-0 Champions League quarter-final win over Atletico Madrid midweek and will play the second leg three days after this blockbuster.

Liverpool extended their EPL winning streak to 10 matches with a 2-0 win over Watford at home, Diogo Jota scoring in the first half before Fabinho’s penalty wrapped it up late. The Reds were impressive in a 3-1 UCL quarter-final win away to Benfica midweek, with a second leg to come next week.

Man City boasts four wins to Liverpool’s one (in 2019) in the teams’ last eight clashes, with three drawn. The heavyweights played out a thrilling 2-all draw at Anfield in Week 7 after a scoreless second half, with City twice fighting back from a goal down. Liverpool have not won a Premier League match at Etihad Stadium since 2015.

It’s been a gruelling schedule for both clubs over the past six weeks with European and domestic knockout matches and international duties wedged in between league games. But both clubs are very deep and were able to spell their big names during the Champions League fixtures.

Man City are $2.00 favourites, despite Liverpool’s superior momentum. The draw is enticing in the head-to-head market, while a conservative option taking Liverpool with the start still provides decent value.