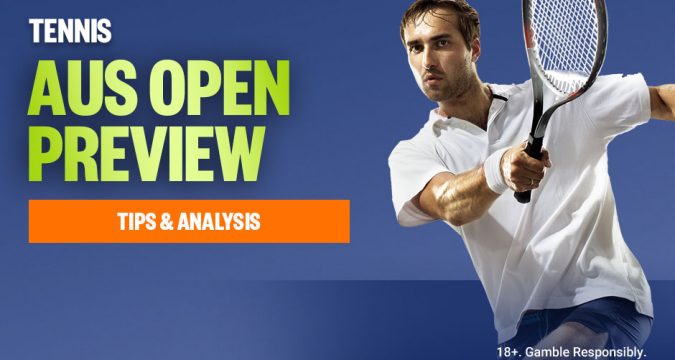 Final Thoughts: Eleventh seed Jannik Sinner has moved to the third line of Australian Open title betting ahead of the quarter-finals in the wake of some increasingly impressive performances. But he is yet to appear in a Grand Slam semi in his brief pro career.

Meanwhile, fourth seed Stefanos Tsitsipas is hunting his third Australian Open semi-final berth in four years, but finds himself as the underdog here after surviving a fourth-round marathon.

Sinner has dropped just one set so far, to Taro Daniel in the third round. He powered past Joao Sousa and Steve Johnson in the opening two rounds, while the 20-year-old’s game went to another level in his fourth-round demolition of 32nd seed Alex de Minaur.

The Italian’s power hitting was prevalent, but he brought patience and subtlety along in his kitbag to dismantle the Aussie livewire 7-6 6-3 6-4. Sinner is into his second Grand Slam quarter-final (after his breakout 2020 French Open run) in only his ninth major.

Stefanos pushed to the brink

The Green 23-year-old then came from a set down twice to beat 20th seed Taylor Fritz in a five-set endurance test. The 200-minute epic was full of incident, with the tempestuous Tsitsipas handed several code violation penalties for receiving coaching assistance.

Tsitsipas reached the Australian Open semis in 2019 and 2021, before storming into a maiden Grand Slam final at last year’s French Open.

Tsitsipas leads the pair’s head-to-head 2-1. The higher-profile Tsitsipas won clashes at the 2019 Rome Masters and 2021 Barcelona Open comfortably in straight sets, either side of Sinner’s three-set victory at the 2020 Rome Masters.

A likely semi-final showdown with tournament favourite Daniil Medvedev looms for the winner here. Tsitsipas is a wily, fiery competitor and his big-match experience may provide him with the edge. But a fresher Sinner is playing with striking confidence and composure – I’m backing him to get through in four sets.